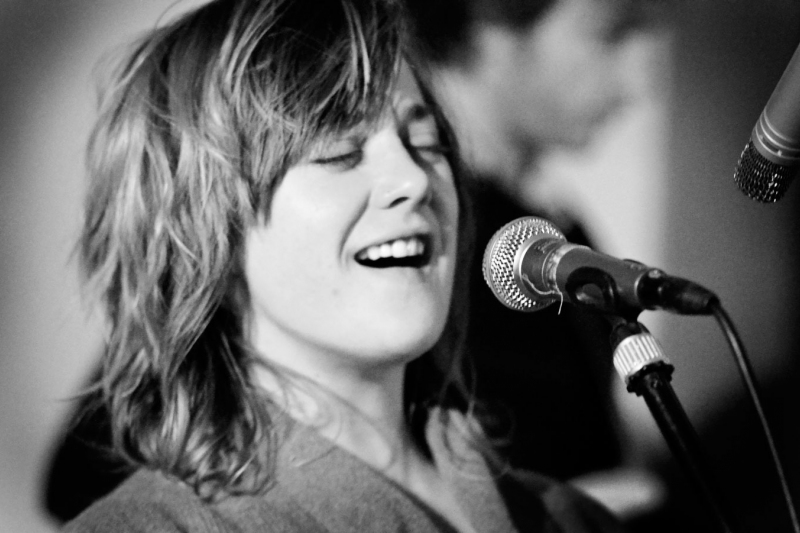 When WILLY MASON played here in February we asked him if he knew of anyone we should check out and he told us about NINA VIOLET, a fellow inhabitant of Martha's Vineyard in Massachusetts, a Mason family friend and an integral part of Willy's live band on viola, banjo, mandolin, guitars and backing vocals.

So we took him at his word and contacted Nina to see if she'd like to play here one day and to get hold of a copy of her album NINA VIOLET + THE INVISIBLE ORCHESTRA.

We have since found ourselves having a bit of difficulty removing it from the CD player...such is Nina's mesmerising vocal and very modern-sounding fusion of country, folk, roots, blues and jazz... punctuated, and then some, by experimental Beatles-style string arrangements and the occasional Bluegrass, Appalachian or Celtic wig-out. So many influences, such disrespect for boundaries...Hell, she's probably influenced by PAGANINI and MEMPHIS MINNIE too...

We haven't quite worked out who Nina reminds us vocally. Like all class acts she reminds you of several people at one and the same time but the whole thing is so seamless that you have your work cut out to identify them and she just ends up sounding like herself....Buf if we say there are similarities to AIMEE MANN, ALISON KRAUSS, ROSANNE CASH, GILLIAN WELCH and LUCINDA WILLIAMS...well you get the picture: she is right up there. Which is why we bagged her when she agreed to take time out from Willy Mason's extensive UK tour to play here - en route for Leeds Cockpit - with Willy's younger brother SAM MASON on drums...

This is Nina's biography, in her own words:

"I sing, play viola, maybe some banjo,mandolin, electric and acoustic guitar... and I think we'll be playing a song or two of mine in willy's set on the tour. I don't have a bio written, but we're (willy and band) all from the same home-island, and we've all been playing together for seems like forever in different incarnations. I'm a farmer/gardener when I'm not playing music, and my whole family plays as well: my mom is on her way to play on my new record I'm making at this very moment at old soul studio with my sister marciana jones, sam mason, and colin ruel. My influences are the Masterpiece Earth, especially the ocean and the woods, my family and willy's family, and the community on the island. I guess that's about it. I love to sleep outside, especially in my tipi."