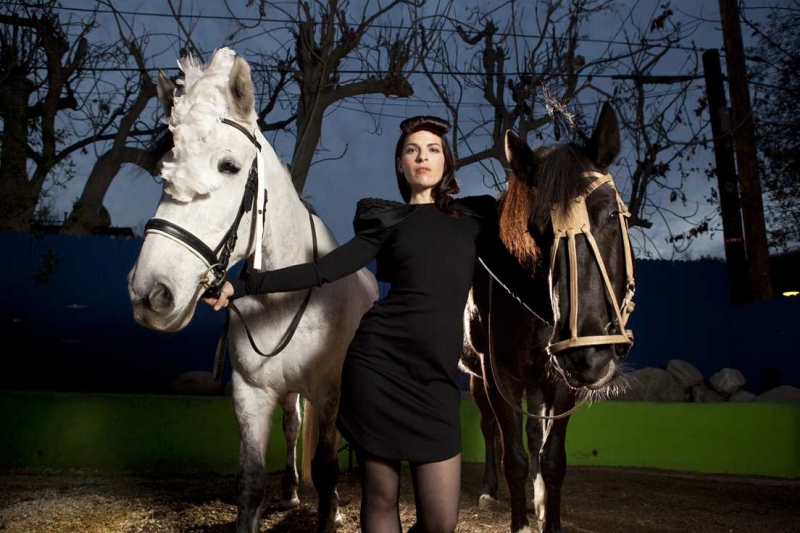 We have seen the future (in Middlesbrough, actually) and its name is JESCA HOOP. A former nanny to Tom Waits' children in California, Ms Hoop admits to liking JONI MITCHELL, KATE BUSH and BJORK.... and in her bewitching, crystalline-pure vocal you can also hear the melodramatic popular song of JUDY GARLAND and EDITH PIAF. But the sheer, unbridled invention of her songs prompts the description we like best. Jesca Hoop: the LADY GAGA of freak folk...

Jesca, a California Girl who's recently relocated to Manchester, says: "Here in the UK I am just starting out but have been fortunate enough to find Jimmy Wallace, who is a delight and a wonder on the guitar, and Zoe Choitis who is a Greek goddess and a sultry sexy singer. These people are some of, and of course not all of, the greatest gifts in my life."

"Hunting My Dress is a strange and yet strangely familiar album, full of musical inventions that back Hoop's crystal-clear vocals perfectly: think Sandy Denny had she been brought up Mormon in California. Reassuring and unsettling in equal measure, Jesca Hoop might just turn out to be the Lady Gaga of freaky folk."  Independent on Sunday

"By turns soulful and contemplative, spirited and witty, Hoop effortlessly shifts emotional gear, a striking ability to meld the traditional and the contemporary and her forceful, crystalline voice the constants"  Time Out

It has been quite a year for Jesca Hoop thus far. Tipped by a diverse range of publications from Uncut ("excellent"), Time Out ("bewitching"), OMM (Tips for 2009), The Sun ("Single of the Week" for "Murder of Birds"), Esquire, Music Week and a two page feature in The Times on the back of one limited self-released UK debut EP. Interspersed shows and radio sessions for the likes of Marc Riley have had to manoeuvre around the recording of the follow-up to her US-only debut album from 2007. This arrived in the supremely elegant and unique shape of Hunting My Dress released in November.

Jesca's also received notable endorsements from Tom Waits and the nation's new Humphrey Lyttelton-in-waiting, Elbow's Guy Garvey, who became so enchanted by her music that he invited her onto his radio show. They got on like a house on fire, so he continued his open house policy by extending an invite to join the Elbow US tour in April 2008, which led into a UK tour in October 2008 followed by another US tour in August this year. He also lends his subtle yet inimitable vocal strength to "Murder of Birds".

These notable artists are not ones to bandy plaudits easily and neither should they. So what you may ask binds these people together? Maybe it is the darting melodies and sense of play nestled next to a capacity for wonder... Or maybe The Times summation gets somewhere close as "her voice swoops and pierces the high heavens and then the song soars down low". Or maybe it is simply her ability to roll up the sleeve and get on with things and not wait for anyone to open that elusive door. She has toured relentlessly across the US and Europe, gaining fans in abundance wherever she goes. She is a force of nature that plays her intricate tunes for the right reasons. And what tunes they are. Brave and bold you can assign to her. Shrinking violet you can't.

Oh, and did we mention her you-could-not-make-this-up background? If you have served as nanny to Tom Waits and Kathryn Brennan's kids, most things are going to be small in comparison. Add to this her strict Mormon history in a family of five children in California where her childhood was highly musical, singing elaborate harmonies with her siblings of traditional folk songs. As her distinctive voice and obvious natural gift for inventive song craft will attest, Jesca has music running through her veins. Pursuing her own path away from her strict upbringing, fuelling the visionary musical worlds in her head, Jesca traveled in the West - Wyoming, Arizona - where she became involved with such diverse activities as working in wilderness rehabilitation programs for troubled youths. When one trek too many halted this temporary world, she made her way into the aforementioned nannying position.

By then, Hoop had already been writing songs and performing with a band, and Waits took an interest in her songs from a caring distance. Through him, an early version of the swirling "Seed of Wonder" (from the Kismet debut) made its way to music publisher Lionel Conway, who in turn gave it to Nic Harcourt, the musically adventurous and influential host of "Morning Becomes Eclectic" on radio KCRW in Santa Monica. After triumphong at SXSW in 2008, things started to move along at a steady pace and resulted in stints in the UK and the Kismet Acoustic EP.

The making of Hunting My Dress is informed by sorrow yet ultimately the new form of love and stasis that can be left in its wake. It is also a reading of the "dream" state and moments around the witching hour. It also heaves with sensuality and love. The loose acoustic framework of the Kismet Acoustic EP has been expanded upon but all the musical parts coalesce and work around Hoop's versatile vocal performance. Her improvisational flair as a singer is one of the most significant unifying aspects of her work. She delivers her vocals as if she is making up the melody on the spot, a sure sign of natural talent.

Co-produced in conjunction with Tony Berg at his Zeitgeist studio in LA (full of a variety of "instruments, doo da's, wizzles and machineries"), Hoop sees the process as her "quickfire" record. Bagging as much energy as quickly as possible so as to not over think or crowd out the ideas. "My aim was to produce as much energy and force with as little sonic information as possible. Layers can be a rather complicated recipe. Less is more was our motto. The narrative is the centre of this record while percussion/drums and electric guitar play the primary supports. I applied as little as possible to each track and was highly protective over the voice and the story it relays. Anything is worth trying and nothing is too precious to mute" She also adds that due to the feeling surrounding the strength of the songs that "This record was relatively effortless and a sheer joy to create!" This again is quite something when you consider that she was flat broke during the whole of this recording period and borrowed studio time only when an opportunity revealed itself, working around busy schedules at odd hours. This only made for a more emboldened experience.

Again, as with the Kismet Acoustic EP, it feels as though assembled on the fly with its sparking energy. It is also warming to hear the clever intricacies of the harmonies are still intact alongside Hoop positively attacking the tracks with gusto whilst in no way crushing them. The confidence in her own vocal performance ushers away any comparisons with "precious" folker's. It is ravishing in short.

"One of my favourite tracks on the record, "Whispering Light" has only my guitar, voice and drums. Another is "Feast of the Heart" which is made up of just two basses, a totally haphazard drum track and my voice. The songs were written over a span of like 16 months. As a body of work they sound like they are from the same volume...chapter...or season". Apt that she pinpoints "Whispering Light" as it opens proceedings. We are immediately into a place where she teases and goads her own lyrics, playing push me-pull you against the stark backdrop. It seems perfectly economical as was intended. This is followed by the swooping "The Kingdom" where Hoop embodies a "banshee-esque battle goddess who's call it is to deliver a spell bound death to those dying, yet still attached to this earth". This story is carried on the back of monstrous percussion, through the wail of sirens and Hoop's fireside narration. The wobbly playfulness of "Four Dreams" is next with its stand out dream-like slide blues interlude from Blake Mills. "Angel Mom" brings forth the album centerpiece that is pretty self explanatory. Never manipulating grief, it can only invoke an ironic smile whilst being on the edge of collapse, as is mirrored within the arrangement. Truly beautiful and evocative.

"Feast of the Heart" drips with passion, as if Marc Ribot joins a rampant Hoop letting her tresses a go-go, with military drums adding to the maelstrom. Things are calmed by another highlight in the form of the marvelously lilting "Murder of Birds". If anyone wants a lesson on how to accompany on a duet, just listen to this impeccable, restrained performance from Guy Garvey, weaving around Hoop who more than proves his equal. "Bed across the Sea" in turn brandishes a new love found and pulsing heart beating hard and often.

No album would complete without a murder ballad right? Just ask Nick Cave. "Tulip" delivers in spades and notches up yet another strident vocal performance. The album is rounded out by the embrace of the title track "Hunting My Dress". And in the words of Jesca, it was also a way to narrate herself as a "fire carrying raccoon"! The layered backing vocals at the tail end of t he track are simply stunning.

Artistic ambition and a near obsession with sound and sensual wordplay are the rule of thumb all over this delightful work. We should be proud that she now resides on our fair isle after a lifetime living in the US. Their loss is our gain.

Jesca Hoop's lyric, "Your passion marks you different" could not sum it up any better really. She has made the album that she most wanted, and in turn we should dive right in and sample this distinguished talent and her work.