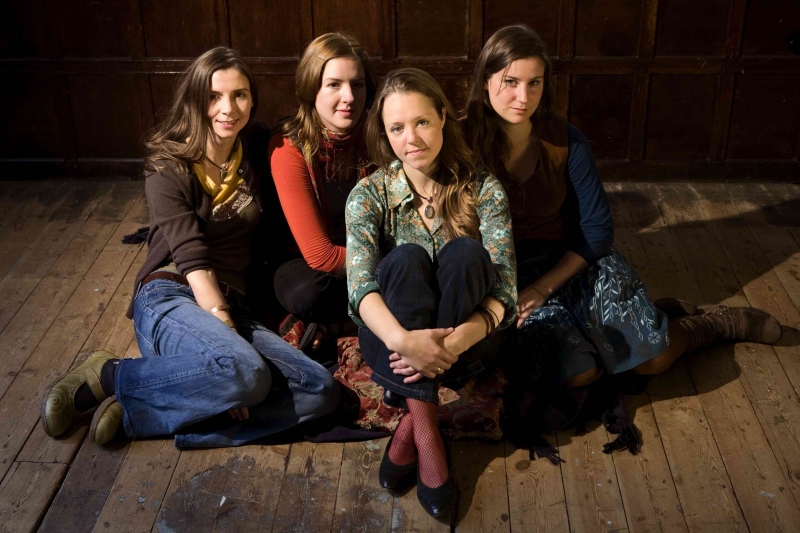 Australian singer songwriter Emily Barker releases her new album DESPITE THE SNOW on her own label Everyone Sang (through Proper Music Distribution) following widespread critical acclaim for her debut 'Photos.Fires.Fables'.

Despite The Snow was recorded over a snowy Easter weekend in a sixteenth century Norfolk barn, with Emily joined by her all-female band The Red Clay Halo - Anna Jenkins (violin), Jo Silverston (cello) and Gill Sandell (accordion / flute). The band recorded live takes, giving the record a very intimate sound which encapsulates the vitality, virtuosity and charisma of The Red Clay Halo quartet.

Hailing from Bridgetown in Western Australia, Emily first entered the UK music scene via the Cambridge Folk Festival, where she appeared with guitarist Rob Jackson (Boo Hewerdine) in 2002. They went on to form "the-low-country", who released 2 albums, and enjoyed several plays on John Peel's show. In October 2005, Emily won both Country Song Of The Year and Regional Song Of The Year at the prestigious annual West Australian Music Songwriting Awards. Also in 2005, she sang in place of Stephanie Arlene with The Arlenes on their UK tour.

In the past year, she has performed at Glastonbury (Avalon Stage), Cambridge Folk Festival and supported JOSE GONZALEZ on his Australian tour and opened UK tour dates for THE WAIFS, MARY GAUTHIER, BILLY JOE SHAVER and TONY JOE WHITE.

Emily Barker is from a tiny rural backwater in the remote south west of Western Australia. Against a backdrop of majestic forests, timber towns and cattle farms, her close knit family has long been part of Bridgetown's vibrant mix of mill workers, farmers, artists and escapees fom the big smoke.
Her debut CD, Photos.Fires.Fables, is an eclectic tapestry of old timey narratives weaving gothic stories of fire and tragedy, balanced with inspiring tales of the struggle for love, asking big questions and embracing hard lessons. She's a great singer and a sublime acoustic guitarist, but Emily Barker's real passion is storytelling.

She has learnt the intricate layers woven beneath the gentle, apparently benign tapestry of smalltown life. Her parents refused to countenance television, opting instead to encourage their children to communicate effectively, observe clearly and participate in community activities. And life in the family home was purposefully simple, yet full of encouragement and support.

"As a young child my mother used to sit the 4 of us kids in a circle" says Barker."She'd play her nylon string guitar and give us each a part to do and we'd sing 4-part harmonies to old traditional tunes and catholic church songs. And my father had a very extensive LP collection that became the soundtrack to my childhood. He loves folk, country and and blues music, people like Neil Young, Bob Dylan, Joni Mitchell, Rickie Lee Jones, Sandy Denny and Steeleye Span. I just soaked 'em up and loved trying to sing Joni when I was 8, but Neil Young seeped into my soul and he's still my biggest musical hero".

Although the local indigineous community knew the area as Geegelup, the townsite was established in 1857 and later named Bridgetown in honour of the first ship to carry wool from Bridgetown to England. Today, it is a place of old town halls, tiny shops, rambling hotels and stunning scenery. The entire town has been declared to have Historic Town Status, protected by Australia's National Trust. Miners from nearby Greenbushes, sheep and cattle farmers, fruit growers and hard as nails timber workers all mingled in Bridgetown's streets where Emily Barker grew up...and she watched, listened and took note.

"I've always had an interest in people: their history, their personality, their stories" she explains. "It dominates my writing. We never had a TV in our family so we kids developed strong imaginations and any creative explorations were encouraged by our parents. I had horses when I was younger and used to spend hours riding through the Australian bushland. Lots of pondering life, being still.

"Home" is a recurrent theme in Barker's songs, the need to explore beyond and the yearning to return. She usually writes from the protaganist's perspective but often instills the song with her own longing for the nuturing smalltown life, paradoxically opposed by the explorer's need for new experiences, new places and the bittersweet sorrows of departure.

"The Blackwood River runs alongside our house and regularly crops up as a symbol of home, as are the glorious orchids we often discovered, the birds we'd learn to recognise and the rolling hills which seem so unique in Bridgetown. Yeah, home is a big thing for me. But you cant stay forever in a smalltown - if you want stories about people, you need to get out of town, go see some places, meet some new folk. Nowadays, I live in London, visit Europe often and return home once a year."

'Barker's borderline obsessive love songs are intense yet seemingly played just for the thrill of it. Recording her second album in Norfolk over just four wintry days, her voice rings clearly among the acoustic arrangements, stripped of studio frippery and all the better for its carefree simplicity.'
(**** Q)

'Emily Barker has such an incredible voice ...she surpasses any critical superlatives. The melodies at times evoke Richard and Linda Thompson...as strong a collection of acoustic folk songs that I have heard in a long time'
(8/10 Americana UK)

'She has a gorgeous, sincere voice that grabs you and won't let go'
(The Sun)

'A masterpiece that will not fade with time. Barker is one of those talents that comes along once in a lifetime, if you're lucky.'
(**** Maverick)

'Her fellow Australians The Waifs are an obvious comparison, but perhaps a more relevant name is that of Laura Veirs - with All Love Knows and particularly Disappear sounding a lot like the American's earlier work'
(Musicomh.com)

'Simultaneously haunting, relaxing and uplifting... A hugely enjoyable album that will doubtless translate just as well in a live setting.'
(7/10 The Music Magazine)

'Nobody sounds quite like them, and there are moments of transcendence here (on 'Nostalgia and 'All Love Knows' in particular) when everything is just so perfect that it's all too much and a lump appears in the throat. An album of quiet power.'
(**** Rock 'n' Reel)

'Another lovelorn excursion into spooked Americana and old school backwoods trad folk that will conjure thoughts of Gillian Welch, Laura Veirs, Be Good Tanyas and, on Breath especially, the golden age of Emmylou.'
(Netrhythms.co.uk)

'Prepare to melt - these are campfire lullabies sent down from the Gods.'
(7/10 Teletext)

'The country/folk hybrids here wash over the listener effortlessly warm and cosy, with the band opting for a minimalist approach that really allows the music to grow.'
(Subba-Culture)