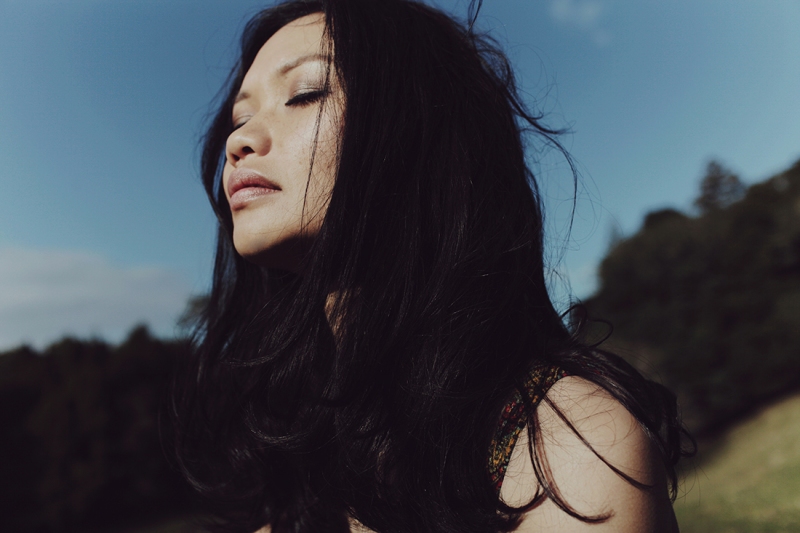 "How many musicians will be on stage tonight at the Band Room? - Eight."  You realise the Band Room is a small hall on the moors? It could be a tight fit, Bic; apparently they're extending the stage for you.

"I like that sort of setting; intimate. We've got the average rhythm section, keyboards, two chicks singing backing vocals, and we've had been like this since November last year when I made the new album with Neil Finn."

A multi-platinum star in her native New Zealand, world tours with Neil and Tim Finn (Split Enz, Crowded House), and the V Festival in 2006, but this was a unique chance to see her in the ultimate intimate venue.

In a review of one of her London concerts The Guardian likened the 'desperately beautiful' half-Chinese, half-Maori star to Norah Jones...but added: " She is a much more interesting songwriter than Jones, and her honeyed, sinuous voice charts wilder territory...

"With just her guitar for accompaniment, these songs glimmer and twist like spider-silk drifting through golden summer air. The giddy, see-saw melody of Election Night recalls the Cocteau Twins...while on Wild Is the Wind, a song best known from Nina Simone's definitive take, she offers a supremely delicate, immaculately judged reading, unafraid to let verses ebb in and out of interludes of suspenseful silence.

"Dylan's One More Cup of Coffee seems similarly to belong entirely to her, an equal to her own Sway (the standout track from her debut album, Drive), whose heart-wrenchingly simple sentiments raise goosebumps. What she does, it seems, is infect apparently straightforward songs with a bewitching otherness; to borrow a Cocteau Twins phrase, it's the "sugar hiccup" in her voice. She returns for a single encore, less a song than a wreath of smoke, called Counting the Days. It ends precipitously, vanishing suddenly, and you realise you've experienced something utterly magical."

Runga’s uniquely phrased pop songs and hauntingly beautiful melodies have already earned her a special place in the pantheon of New Zealand song. Having drawn comparisons with Jewel, her third album Birds was released in NZ in November 2005 where it debuted at #1 and was certified Double Platinum within a week of release.

Since emerging at 19 years old with her debut single ’Drive’ a decade ago, she has travelled a remarkable musical journey, taking her to the top of charts at home and around the world at the same time as winning enormous critical acclaim for her winsome, transfixing tunes.

Her albums, Drive (1996) and Beautiful Collision (2002), have sold seven and eleven times platinum respectively in New Zealand, the latter spawning the single ‘Get Some Sleep’, a top ten hit in Japan and Ireland that also broke into the UK top 40. Beautiful Collision featured at No.32 in MOJO's list of the best albums of 2002 and No.34 in Uncut’s annual critics’ poll for that year.

Having spent most of 2003 and 2004 living in Paris and London, Bic returned home for the summer of 2005 before setting off on a world tour playing as a soloist in support of the Finn Brothers.

Neil Finn had long been a fan of Bic’s music and had contributed vocals to Beautiful Collision. Talking with her on the Finn Brothers tour, he immediately warmed to Bic’s idea to record her new album Birds as "live" as possible – and agreed to join as pianist/guitarist with the ensemble of players Bic recruited for the job. The mesmerising album which ensued contains a classic version of Nick Cave's And No More Shall We Part...