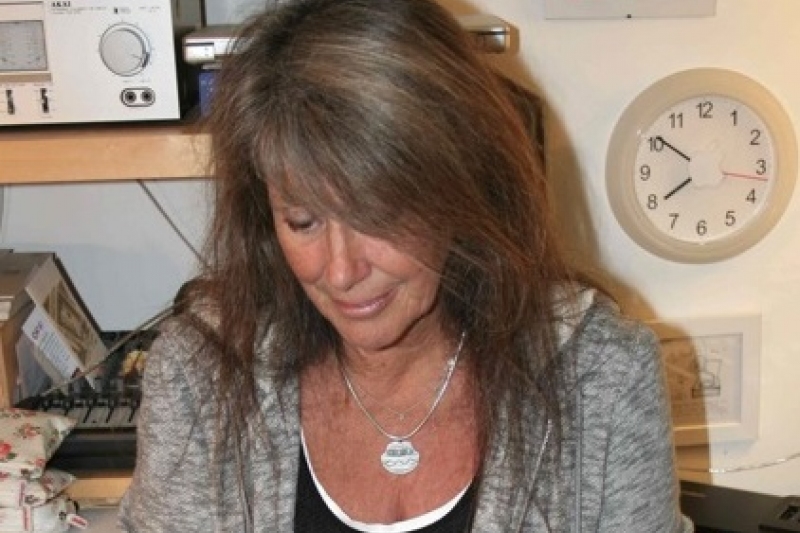 Discovered by ROLLING STONES manager Andrew Loog Oldham, Bunyan released her first single, the Jagger-Richards penned 'Some Things Just Stick In Your Mind', on Decca in 1965. Promoted as the new Marianne Faithfull she made her debut proper following the horse-and-cart Hebridean road trip which inspired the Joe Boyd-produced 'Just Another Diamond Day', featuring members of INCREDIBLE STRING BAND and FAIRPORT CONVENTION. The record - released in 1970 - failed to achieve lift-off but over the years acquired a cult following as a lost English classic, sold on eBay for as much as $2000 and was re-released in 2000, inspiring a new generation of folk artists, among them JOANNA NEWSOM, VETIVER, ESPERS, ANIMAL COLLECTIVE and DEVENDRA BANHART. 'Lookaftering' (2005) and the 2-CD compilation 'Some Things Just Stick In Your Mind' (2007) consolidated Bunyan's reputation - and her iconic music eventually reached millions anyway when 'Just Another Diamond Day' and 'Train Song' were used in TV ads by T-Mobile, Reebok and Samsung.

Nine years after ‘Lookaftering’, her last album of new material, legendary British singer-songwriter Vashti Bunyan returns with a breathtaking new LP. Recorded largely in her home studio, ‘Heartleap’ is a unique and entrancing collection of ten songs forming what Vashti is adamant will be her final album.

Vashti’s third album follows her rediscovery - after thirty years in the wilderness - with the 2000 re-release of ‘Just Another Diamond Day’ (a bona fide cult classic that made # 53 in the Observer Music monthly’s ‘top 100 British albums of all time’), and the critical success of 2005’s ‘Lookaftering’. With ‘Heartleap’ she has delivered an album with a classic sound, where – for the first time – she herself has been in control of the whole process, from writing and arranging to playing and recording. Working predominantly from a studio set up in her Edinburgh home, the record was slowly pieced together, and reveals an artist at her peak, capturing her songs within fluid settings that masterfully marry content and form.

Both ‘JADD’ and ‘Lookaftering’ saw Vashti‘s songs arranged and framed by others. Joe Boyd’s production and Robert Kirby’s arranging of the former remain timelessly classy, whilst Max Richter’s elegantly beautiful production of Lookaftering was enhanced by contributions from a raft of supporting artists - all eagerly adding their colours. Vashti is justly proud of ‘Lookaftering’, but ‘Heartleap’ is a more personal record, standing solely on the merits and patient endeavour of its author rather than being buoyed by and filtered through the cachet and collaborative creativity of a powerful supporting cast.

The vast majority of ‘Heartleap’ was recorded and edited by Vashti, who “wanted it to be more akin to my very first recordings, the ones even before ‘Diamond Day’. I wanted to try to emerge from the shelter of others and stand out in the open. It would have been much easier had I worked with a producer and an engineer - I would not have had to spend so much time on editing - but that’s been the interesting part. If I’d taken these songs and gone into a studio with them they might have turned out very differently, perhaps more 'produced' - but not as near to how I hear them for myself.”

Recording her vocals when no one else was around to overhear - freed Vashti up to deliver more confident performances. Equally, working without the induced pressures of studio deadlines enabled her to craft it slowly and lovingly in her own time, weaving together tracks out of numerous takes. Predominantly guitar or piano led - with additional instrumentation building throughout - the songs have no underpinning bass-line or percussion, giving each instrument and voice the chance to pace itself.

Where the synthetic instrumentation on Vashti’s ‘Lookaftering’ demos was rejected in favour of recording the warmth and organic nature of real acoustic instruments, ‘Heartleap’ retains those electronic voices, alongside studio-recorded string and recorder arrangements - the two mixed in a delicate balance between the synthesized and the organic. Freely admitting that she can’t actually play the piano, Vashti built the keyboard parts from single notes and multiple one-handed takes. No-one else would have made it or played it that way and it’s that voice, her own voice, that helps lend the record its power and marks it out as distinctive.

“The whole point of the album was finally to learn a way that would enable me to record the music that is in my head, by myself. I neither read nor write music, nor can I play piano with more than one hand at a time, but I have loved being able to work it all out for myself and make it sound the way I wanted. I’ve built these songs over years. The album wouldn't have happened any other way. Sometimes when I replace the arrangements with real instruments they don't work in the same way. The extended notes of the clarinet on the song ‘Heartleap’ for instance could not be played on a real clarinet. I can't 'play' a musician playing their instrument - I can't make them play each note as I want it, but with a keyboard and a music program I am the player."

Concise as ever, Vashti’s lyrics open out a series of locket-like miniatures - stories of family and friends, lives and loves, memories, dreams and realities; of differences in perception and the gaps between people / meanings / understandings; of coping, getting by, surviving. “All the songs are based on real stories or real people, 'Mother' especially. 'Blue Shed' was written when the house was still full of young people slamming doors and yelling. (I do miss them now). 'Gunpowder ' is about an ex-partner with whom communication can still be difficult." There is no vast sweep or ambitious stabbing at the grandiose in her lyric writing, yet in their honesty these close-focused articulations draw you in and resonate with heartfelt emotions and universal truths.

The luminous musical arrangements act with the lyrics illustratively - ‘Jellyfish’ ripples and floats from side to side, “and is soft apart from the vibraphone which is quite harsh - like the dream it's about. The kalimba and the tumbling guitars in Across the Water are to give the song the sound of waves on shingle, and the piano on 'Mother' is to sound a little like the old un-tuned upright piano I overheard my mother playing sometimes, 'briefly unbound' from her duties as wife and mother."

Recording in studios in California, New York and London - but mostly alone in her own studio - it took in total seven years to put together these ten songs. The first was written in 2007, the last just two months before mastering. A hiatus in recording came with the untimely passing of Robert Kirby in 2009. Robert had arranged three songs on ‘Just Another Diamond Day’ and the pair had just reconnected and planned to work on new arrangements together - just weeks before he died. It would be another two years before she took the decision that she must arrange the music herself, with Robert always in mind. The subsequent three years saw her gradually picking the thread back up and working with renewed purpose. Slowly more songs found their way out of her. Gems like ‘The Boy’ - which she’d sat on, fretted over and intended to ditch - were prised from oblivion. Seven became ten and those around her finally began to really believe that an end was in sight. The right final mix frustratingly eluded her until the album magically came together in a week in May 2014 - when it was balanced and mastered beautifully at the hands of mixing engineer Martin Korth - and mastering genius Mandy Parnell at her Black Saloon studios in London.

The album’s striking cover artwork is once again taken from a painting by Vashti’s daughter, Whyn Lewis, and forms a neat companion to her hare painting featured on ‘Lookaftering’, giving the impression (besides both album’s titles being portmanteaus) of a pair of bookends. Whyn describes this painting (titled 'Hart’s Leap’) as being “about getting away unscathed… about confidence and self-assuredness, and wisdom. The deer is leaping forward while looking backwards - and it has a little grin. It is said that deer make a large bound of joy when they know they are escaping. The deer is linked with the deerhound shown on the deer’s collar - what it has been escaping from. The deerhound in this case really is just allegory for the thing that chases or hounds you. Life is most appreciated when it is challenged.”

One of the final songs to be written, the gorgeously gauzy, autobiographical title track came to Vashti all of a sudden in March this year, as she was gazing at Whyn's painting. Recorded straight off, with only minor changes made in the final mix, it closes the album perfectly. A bittersweet song, it cryptically catalogues and a whole life’s worth of loving, losing, letting go, getting through; of heartbreaks and happiness and the lulls in between – through a minimal, modular, repetitive structure with recourse to just a handful of compound word variations - surges and tugs between head and heart. Simultaneously aching and hopeful, it looks back with both pain and joy, with resigned acceptance. If it truly is to be the final word on a final album, then it is an utterly fitting and devastatingly beautiful one.

Like the deer on the cover painting, ‘Heartleap’ moves gracefully, enchantingly. Overcoming adversity through sheer willpower, its very existence is a dazzling triumph.

‘Heartleap’ is released on FatCat in UK & Europe on October 6th and in North America via DiCristina on Oct 7th.