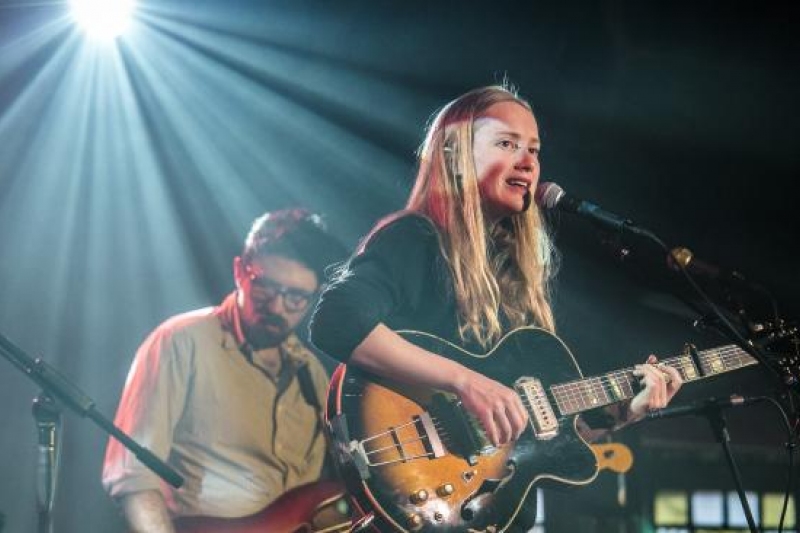 The Weather Station is the Indie Folk | Alternative Rock musical project of Canadian singer-songwriter and actress Tamara Lindeman. Emerging out of Toronto's vibrant folk scene, Lindeman debuted her moody, introspective sound with the independently released East EP in 2008. An LP called The Line followed in 2009, expanding on Lindeman's earthy, lyrical style, driven by her distinctive finger-picked guitar and banjo parts. For the next Weather Station release, Lindeman worked with friend and collaborator Daniel Romano, signing with his label You've Changed Records to release the critically acclaimed follow-up All of It Was Mine in 2011. Though the album was only released in Canada, it gained wider exposure for the Weather Station, leading to several North American tours with acts like Bahamas, BASIA BULAT, and Timber Timbre, as well as a tour of Japan. In addition to collaborative guest appearances on releases by DOUG PAISLEY, Siskiyou, and Field Report, Lindeman also earned a SOCAN songwriting award nomination in 2013 for a co-write with Steven Lambke of the Constantines. After the release of 2014's What Am I Going to Do with Everything I Know EP, Lindeman signed with North Carolina label Paradise of Bachelors and travelled to Paris to record her third LP, Loyalty. Released in 2015, Loyalty was the first Weather Station album to receive both and American and European release, and consequently became somewhat of a critical breakout album.

Her third and finest album yet, and her first for Paradise of Bachelors, Loyalty was recorded at La Frette Studios in France in the winter of 2014 with Afie Jurvanen (Bahamas) and Robbie Lackritz (Feist). The record crystallizes her lapidary songcraft into eleven emotionally charged vignettes and intimate portraits, redolent of fellow Canadians Joni Mitchell, Leonard Cohen, and David Wiffen, but utterly her own. The album was nominated for the 2015 Polaris Music Prize.

All Of It Was Mine (2011), released on Canadian label You’ve Changed Records, found admirers around the world among both audiences and critics. Lindeman toured as a handpicked opener for Bahamas, Basia Bulat, Jason Collett, and Siskiyou, playing shows and festivals across both North America and Japan. She has also been in demand as collaborator, appearing on records by Doug Paisley, Field Report, Will Stratton, Siskiyou, and Daniel Romano, among others. Her series of recorded duets with Toronto-area songwriters was nominated for the 2013 SOCAN songwriting prize. The Weather Station’s acclaimed 2014 EP What Am I Going to Do With Everything I Know features contributions by members of Hiss Golden Messenger and Megafaun.

Though she is an extraordinary singer and instrumentalist, Lindeman has always been a songwriter’s songwriter, earning accolades for her delicate, carefully worded verse, filled with double meanings, ambiguities, and complex metaphors. Outside her musical practice, she also happens to be an accomplished film and television actor, but it’s her directorial eye for quietly compelling characters and the rich details of the everyday, Bressonian in its specificity and scope, that drives the limpid singularity of The Weather Station’s songs.

“Built from blocks of bluegrass, British balladry, and country sadness … Lindeman’s voice flits and cracks, peaks and valleys, comforts and cries … clenching truth like a catch in the throat. She possesses the unwavering patience of BILL CALLAHAN’s later records, delivering every word and worry like she’s pondered it all into acceptance. For songs so intimate, and performances so inward, such careful singularity feels like a remarkable feat.” (Pitchfork).