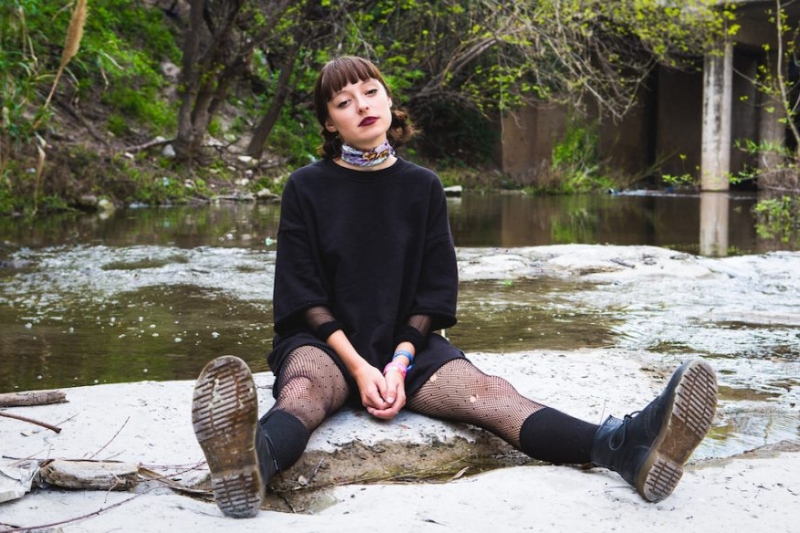 If it's May 4 it must be Tour de Yorkshire weekend and Stella Donnelly, Australia’s hottest new singer-songwriter - who just opened for First Aid Kit in Oz - debuts here the night before the world's top cyclists whizz through nearby Kirkbymoorside. See https://letour.yorkshire.com/the-race/

Supported by Ilana Zsigmond, lead singer of rising York band Fawn, Donnelly – from Perth, Western Australia – specializes in gorgeous lo-fi songs with a lyrical bite. Influenced by Courtney Barnett, Cerys Matthews and Billy Bragg, she released her debut EP, the deftly-titled Thrush Metal, last year with the expectation of selling a few copies. Homegrown fans however had other ideas, and the momentum has been building inexorably ever since.

The Sunday Times says: 'Donnelly’s songs are deceptively simple, her unaffected vocals delivering clear-as-glass lyrics over finger-picked guitar. Deeper immersion reveals the acute observational eye and musical ear that give them extraordinary power. At the EP’s heart is Boys Will Be Boys, a heart-shredding song about the rape of one of Donnelly’s friends that draws you in gently, then explodes like a grenade.'

Donnelly was raised between the Swansea suburb of Morriston and Quinns Rocks, in the coastal suburbs of Perth, Western Australia. She cut her musical teeth singing Green Day songs in her Aussie high school rock band, eventually turning her interest to jazz and contemporary as an adult studying at the West Australian Academy of Performing Arts.

It was at the beginning of 2017 that Donnelly released Thrush Metal, to widespread critical acclaim. The five-track release was written over the space of two years; a musical undertaking resulting in a bold and unapologetic repertoire of songs which has propelled Donnelly to the forefront of the new wave of Australian songwriters.

Her brutally honest lyrics combined with a jazz-folk musical orientation create beautifully poetic songs with sharp lyrical punch lines. Donnelly’s invariably witty, perceptive observations of people and their relationships throw a lot of light on what it’s like to be a millennial woman in the age of Trump, Tinder and third wave feminism.

Rolling Stone says of Donnelly: ‘When Perth singer-songwriter Stella Donnelly released her debut EP, Thrush Metal, earlier this year via Melbourne indie label Healthy Tapes, the expectation was that they’d sell 30 cassettes online and then, she says, “I could move on with my life and maybe write some more music”. Only it didn’t quite go that way – the EP took off big time, and then at last year’s Bigsound Festival, where Donnelly performed two of the most talked-about sets, she was awarded the $25,000 Levi’s Music Prize.

At 25, Donnelly is something of a veteran on the Perth scene, playing in bands such as Bells Rapids and Boat Show, as well as with acts such as Angus Dawson and Teischa. For years, though, she’s quietly honed her solo set, inspired by the everyday lyricism of Billy Bragg, Courtney Barnett and Cerys Matthews.

Musically the five songs on her debut EP veer from the downbeat Mechanical Bull to the sweet whimsical pop of Mean To Me. Linking it all together is Donnelly’s lo-fi approach, and her honest, sometimes devastating lyrics.

When she’s playing live, her between-song banter is such that Donnelly refers to her shows as “half-comedy.” In contrast a song such as Boys Will Be Boys addresses the sexual assault of a friend with such astonishing power that Donnelly precedes the song with a content warning.

Donnelly says of the song: “It was a hard process writing it. And it’s still quite hard to sing. Rape is hard to talk about, but it has to be talked about. Dads and daughters and sons need to hear this stuff. There’s no excuse anymore.”

US magazine Pitchfork is also a fan: ‘Stella Donnelly quickly became one of Australia’s buzziest young singer-songwriters with the release of her debut EP, Thrush Metal—but here in America, Boys Will Be Boys is her first single. And boy, what an opening statement it is. Atop delicate, sing-songy acoustic finger-picking, Donnelly confronts a man who raped her friend and takes to task the accompanying victim-blaming. “Why was she all alone?/Wearing her shirt that low/And they said boys will be boys/Deaf to the word no,” she coos in the chorus, a slight vibrato flaring up at the corners of her lovely voice.’