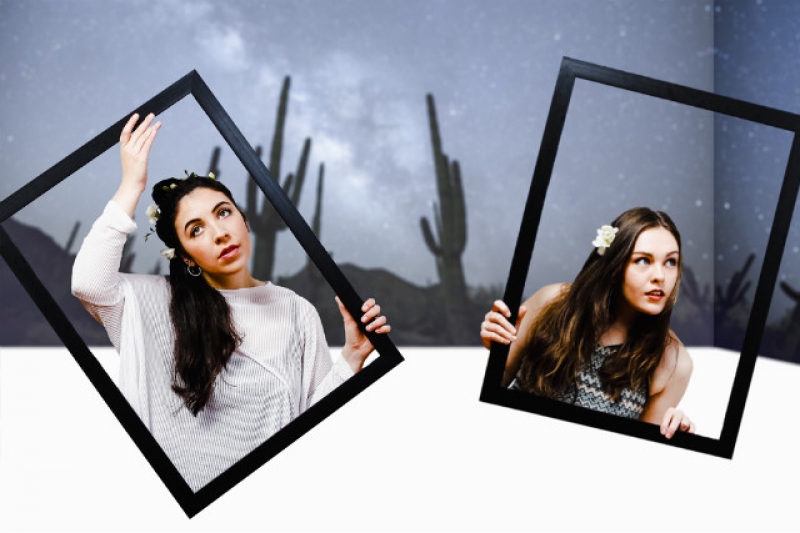 As we traversed the far famed Kerry mountains last Summer we detoured one day into the charming market town of Kenmare on the eve of the annual horse fair (which makes Appleby’s seem like Royal Ascot) and found ourselves mesmerised by Ireland’s Saint Sister at the local Carnegie Arts Centre. Formed in November 2014, Saint Sister are tipped for the top. The brainchild of Morgan MacIntyre and Gemma Doherty, their music fuses early Celtic harp traditions, Sixties folk and electronic pop. Exquisitely soulful vocal harmonies, dreamy synthesisers and sublime electro-acoustic harp are the keystones of a confection which is as shimmeringly transcendental as it is infectious.

One of Saint Sister’s first gigs saw them open for Arcade Fire’s Will Butler. Their debut EP ‘Madrid’, recorded with Alex Ryan (bassist with Hozier) and released in November 2015 consolidated their fan base, receiving massive support on Irish radio and BBC Radio 1 whose presenters loved their magical, minimalist tunes.

Since their formation, the band have toured extensively throughout Ireland, the UK and Germany. They made their US debut in March 2016 with multiple showcases at SXSW, and have also played prestigious shows in Paris and Warsaw. Numerous festival appearances include BBC Introducing at Glastonbury (see the video below), Latitude, Electric Picnic, Longitude, The Great Escape, and the Reeperbahn Festival in Hamburg.

The band’s critically acclaimed follow up single "Tin Man" came out as part of Communion Music’s Singles Club in December 2016 and was nominated for song of the year by the RTÉ Choice Music Prize.

2017 has already seen Saint Sister triumph at Eurosonic festival in Groningen, Netherlands, and at Lisa Hannigan’s sold out show at the Roundhouse in London. The band’s debut album will be released later this year.

'The thick, eerie electro-folk of Ireland’s Saint Sister, not so much haunted as delicately possessed' – The Guardian

‘People to watch’ – The Irish Times

“If Saint Sister's ember catches a spark, it's hard to fathom that their sound couldn't traverse and captivate the globe.” - Hot Press