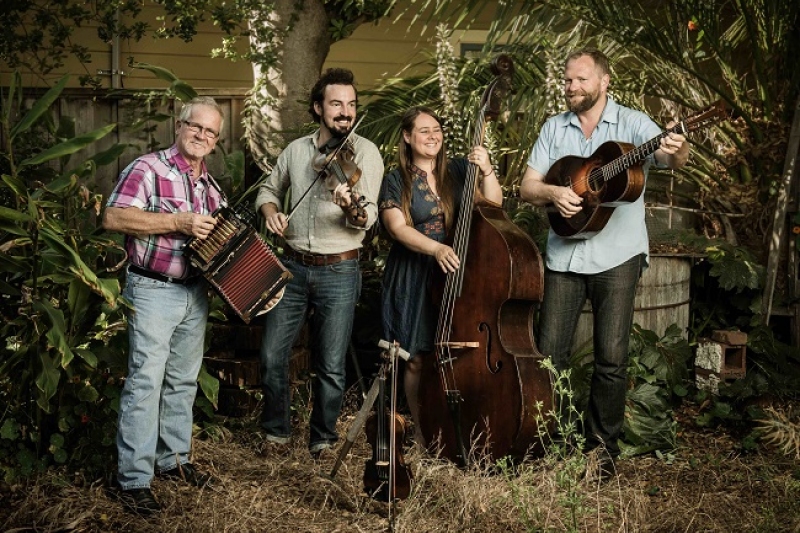 Some of the greatest names in Cajun have played The Band Room. Christine Balfa – Dewey’s daughter – launched our Cajun connection 20 years ago, playing our debut show in August 1995 as a member of Balfa Toujours, along with demon fiddler Kevin Wimmer and banjo virtuoso Dirk Powell, who went on to work with Jack White, Joan Baez, T-Bone Burnett & Loretta Lynn.

Cajun superstars Joel Savoy, Jesse Lége and the Cajun Country Revival are right up there. Spanning generations from across the US nation the Cajun Country Revival is a bona fide supergroup of American roots musicians. Comprising Cajun musicians Jesse Lége and Joel Savoy and two members of Portland Oregon’s Foghorn Stringband, CCR have blown away audiences around the world celebrating (rather than merely ‘performing’) the music that brought them together: Cajun and early Country.

Son of Cajun music royalty Marc and Ann and the founder of the Louisiana-based label Valcour Records, Joel Savoy is a GRAMMY winner for his production work with The Band Courtbouillon and a nine-time GRAMMY nominee, as well as a two-time winner of the Cajun French Music Association’s Fiddler of the Year Award. Having grown up literally at the feet of the Cajun greats he represents his culture with a peerless authority. He has worked and played with the best Cajun musicians in southern Louisiana as well as Country Rock greats like John Fogerty, Linda Ronstadt, Steve Earle, and T-Bone Burnett.

Sharing the stage with Joel over the last 15 years, legendary Cajun powerhouse Jesse Lége grew up in a rural pre-electricity home in Gueydan, Louisiana, spoke Cajun French and learned music from relatives, neighbours, and the family's much-loved battery-powered radio. Today he is recognised as one of the greatest Cajun accordionists and vocalists in the world, having played traditional Cajun music and Cajun French songs for over 35 years. He is a winner of numerous Cajun French Music Association awards: Traditional Band of the Year, Accordion Player of the Year, Male Vocalist of the Year, Band of the Year, and Song of the Year. In 1998 he was inducted into the Cajun Music Hall of Fame.

Completing Cajun Country Revival is Stephen ‘Sammy’ Lind, from Minneapolis, and Nadine Landry, from Québec, both of the Foghorn Stringband. Credited for their role in igniting the Old Time Country Renaissance, the Foghorn Stringband continues to excel as the shining gold standard for American Stringband music. With their 8th album, Devil in the Seat released in 2015 and thousands of shows and over a decade of touring under their belts, it’s no surprise that this band, as proclaimed by US music critic Stuart Mason, "has blossomed into a full-blown force of nature that threatens world domination."